If you’re on this page hunting for the best Visual composer alternatives, look no further because it’s here that your search ends.

That’s the exact aim of this article, to share their pros and cons and help you zero-in on a suitable choice.

But before we dig into the alternatives for the Visual Composer, let’s see why you need its alternatives.

What is Visual Composer? Why do you Need its Alternatives?

Visual Composer is one of the oldest WordPress Landing page builder plugins. It lets you create fascinating (or not so fascinating, a matter of personal opinion) pages on WordPress, with simple clicks and a drag & drop interface. 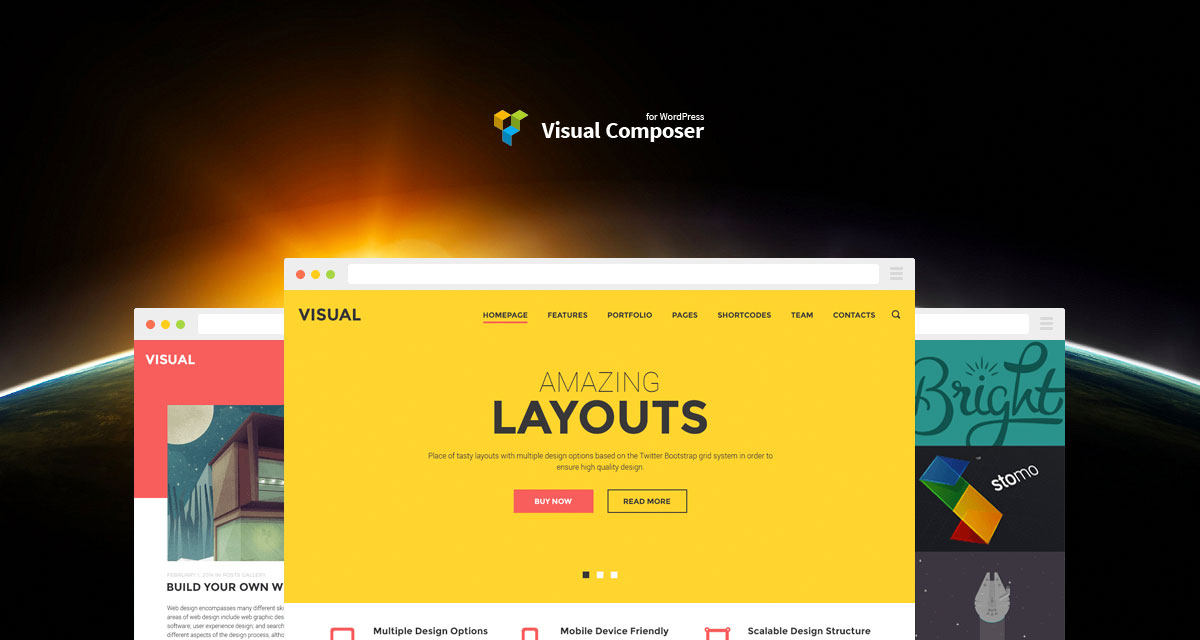 The good things about it are that it’s used by over 2 million+ WordPress users, features can be extended with its over 200+ add-ons, and is affordable (really, it delivers more value than its cost).

But what about the cons of Visual Composer?

Well here they are:

Another Visual Composer alternative that would spring up in anyone’s brains is The Divi builder.

With 437,821 clients already using Divi, there’s no doubt if it deserves to be listed as a Visual Composer alternative.

Divi, alike other top visual editor WordPress plugins is an extremely feature-rich and user-friendly page builder. Obviously, it’s drag-and-drop, but even at this very basic level of similarity between Visual Composer and Divi, they differ widely.

The Visual Composer’s drag and drop interface is somewhat clumsy, while that of Divi’s features a smoother drag and drop, as well as in-line editing. 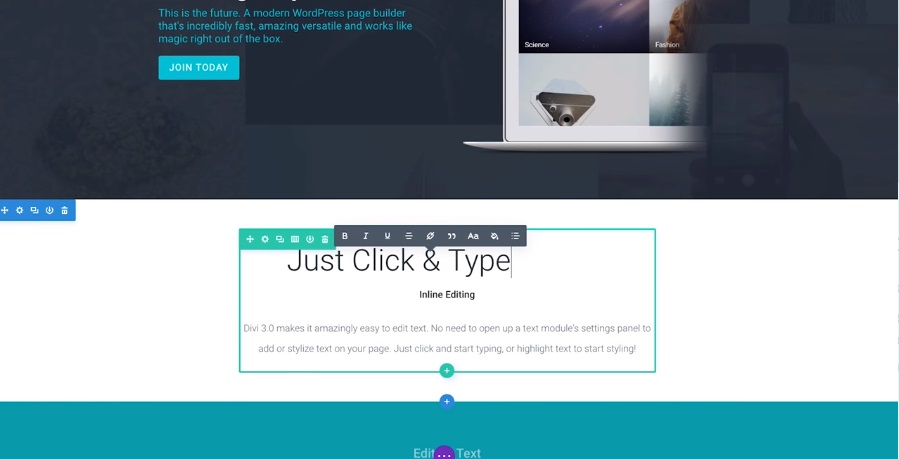 It has a back-end editor as well, so you can first design your page layout on Divi, and then will have to switch to the front-end to preview( or customize) the designs. Here’s a sneak-peek:

And it’s so advanced that you can choose which settings of your elements are to be saved as a Global module and which are to be excluded! So that’s one of the primary edges it holds over Visual Composer. 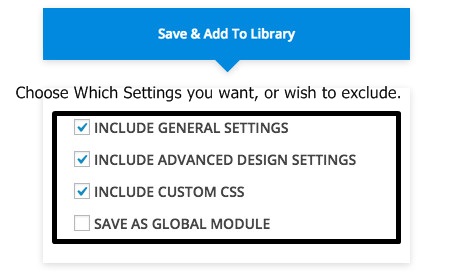 Also, Divi is a “row and column” page builder, so we first need to design the layout of the page with elements placed in different rows and columns, and then fill it with content, this is something that boosts creativity and provides for much more designer’s liberty! 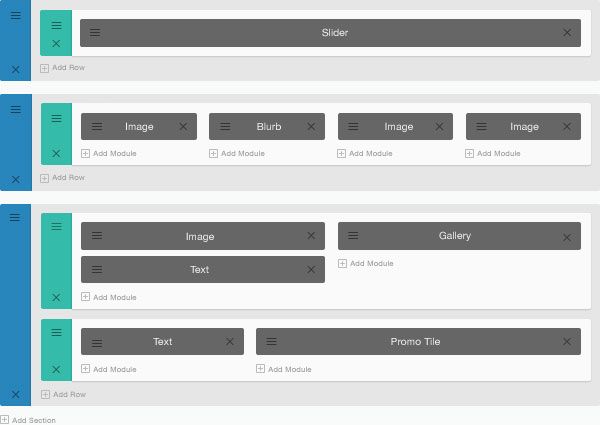 As far as module-support goes, Divi has really done itself over on this with 46 individual page building modules, which include: 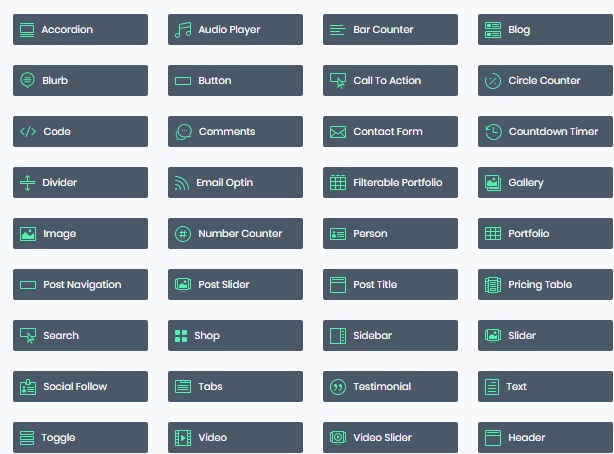 Obviously, customization is great and extensive as well, there isn’t anything which you can’t customize according to your own preferences. 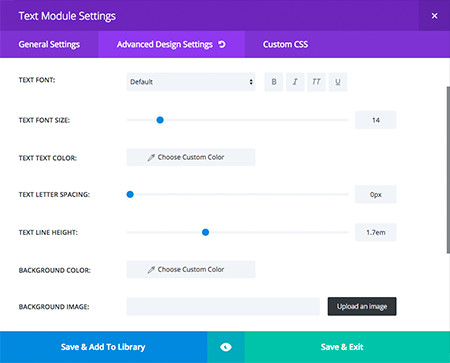 Something that provides Divi with its unique flavor is its “disable” element feature, this isn’t available with most other Visual Composer alternatives on this list though.

It lets you “disable” an element instead of having to delete it completely, so if there’s a temporary promotional campaign you’re running and you spent quite a bit of time creating it, and you might need to use again in future, simply hit the disable button.

Advanced features such as unlimited undo/redos, locking-in content to prevent editing, spacing and padding control etc are available as well.

And to top it all up, it also has wrapped itself with 30 pre-designed page layouts. 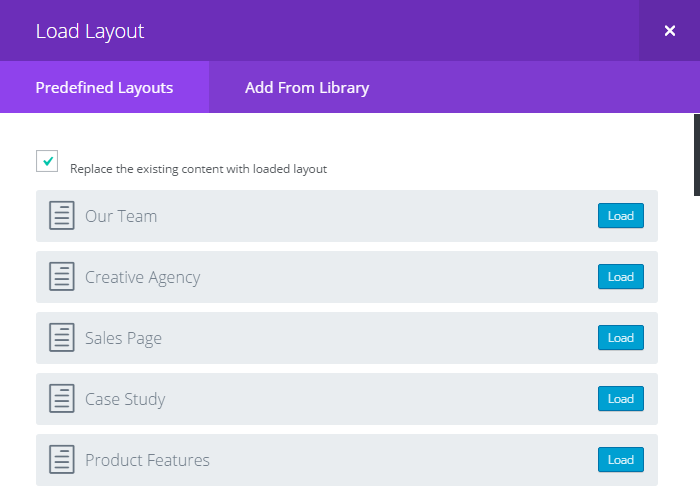 Another advanced feature worth singling out here is its A/B split testing functionalities, which lets you split-test your pages! 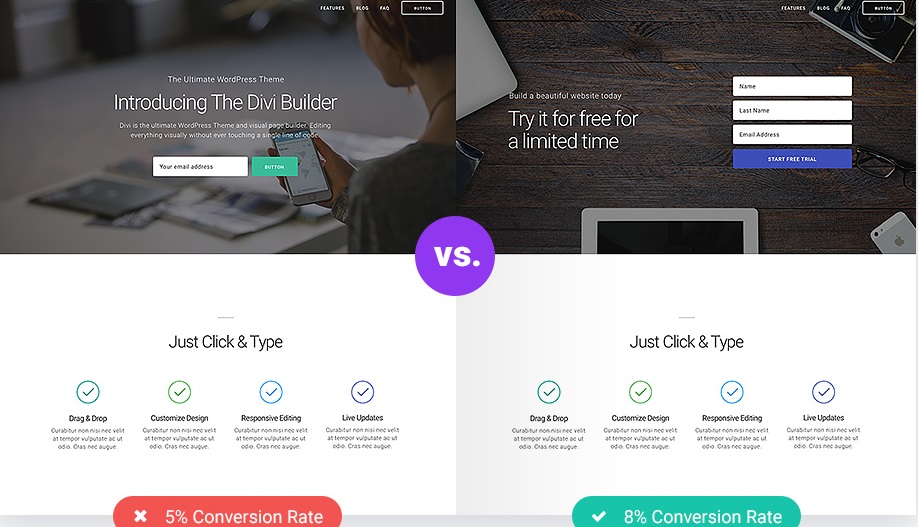 So it’s brimming with features, but does it burn a hole in your pocket? The Divi Builder is priced at $89.00 USD, considerably higher compared both to Visual Composer but that’s so because it’s bundled up with a lot of things, including “All” of Elegant Themes’ themes and plugins

But you need not worry… You have special access to UBT discounted price for Elegant Themes. 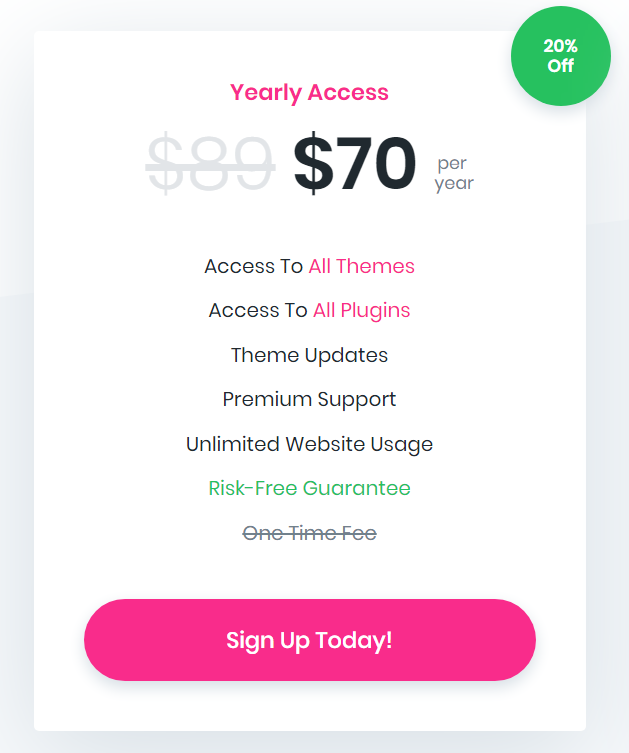 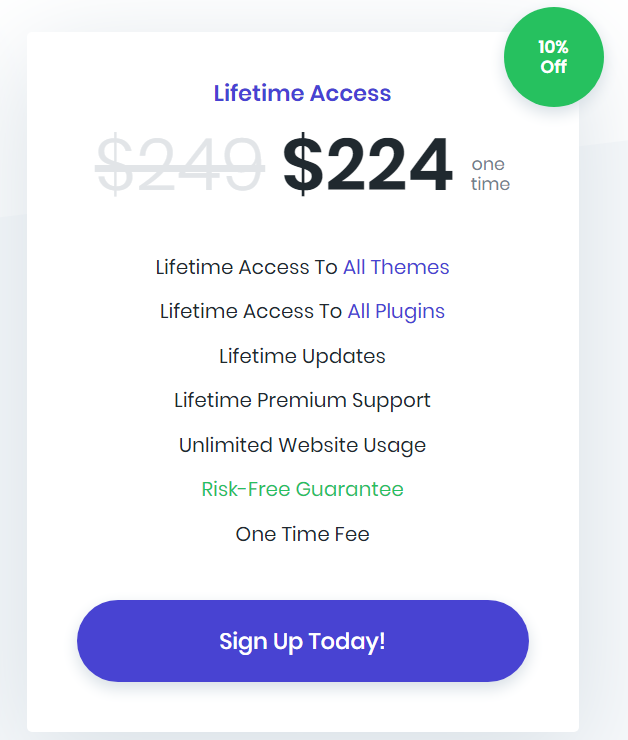 In a short span of existence-time, Elementor has been able to get 1.8 MILLION users worldwide. So that clearly gets on this list of best Visual Composer alternatives.

The primary reason I love Elementor is, it has a heavily equipped “Free version” as well, which does most of the tasks you’d expect of any page builder.

Although obviously, the Pro version packs a better punch. No coding skills are required with Elementor.

When you start editing a page or a post, it shows an Elementor button which redirects to another page for front-end editing. 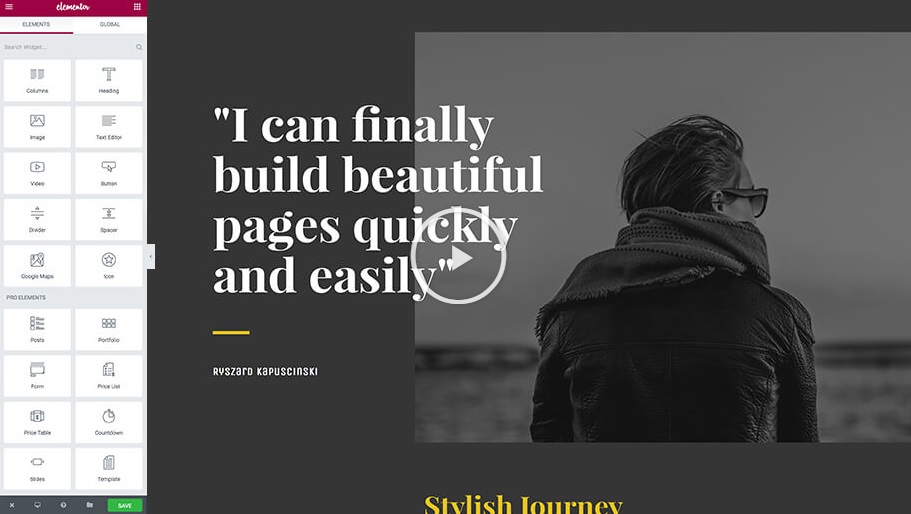 Talking about Landing pages, it features a number of pre-built landing pages up for grabs, which can be taken up, edited and made live within a matter of minutes and without any hassle.

It also comes with Elementor Canvas, which is a blank template and helps you build your dream landing page without any hassle. 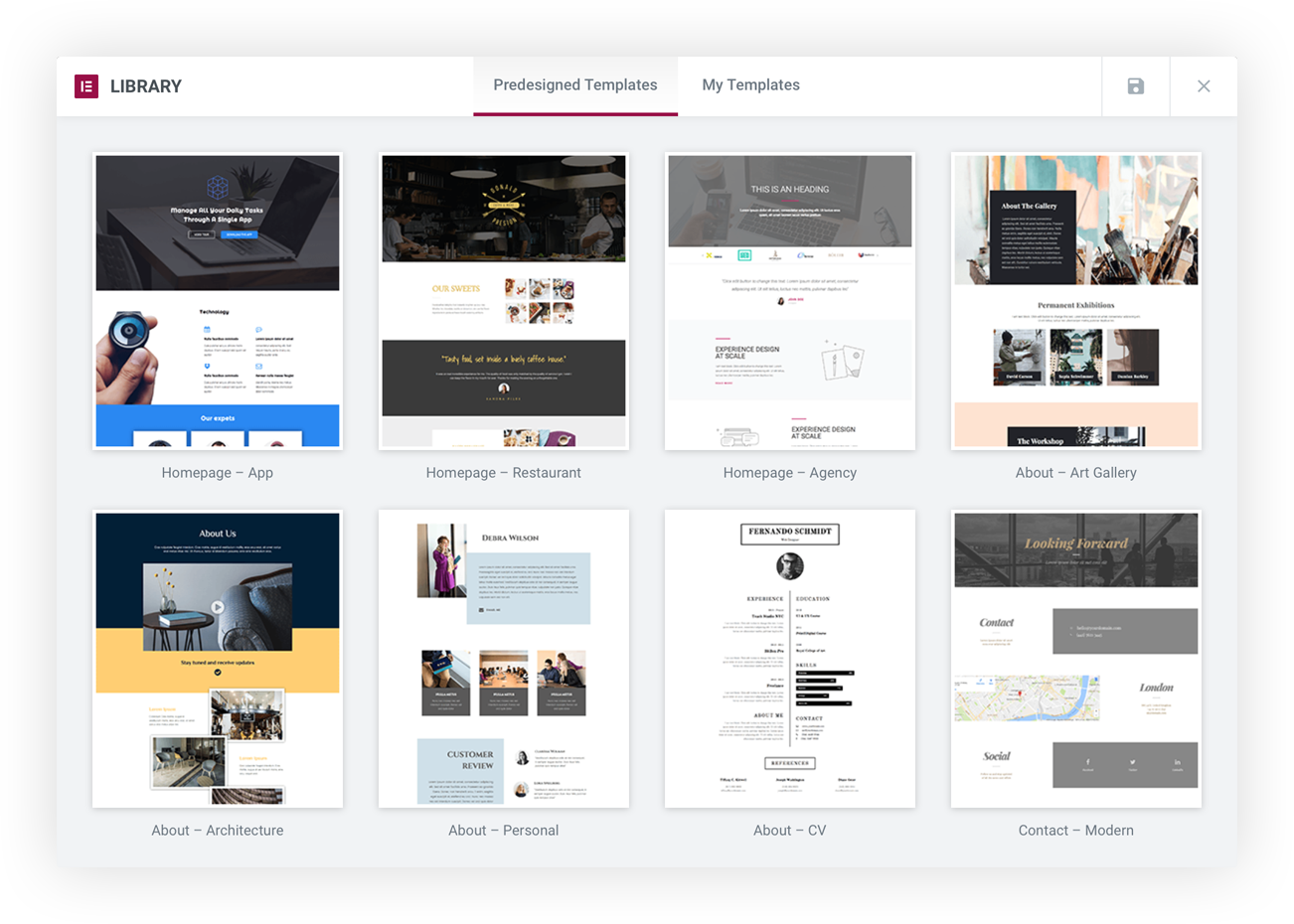 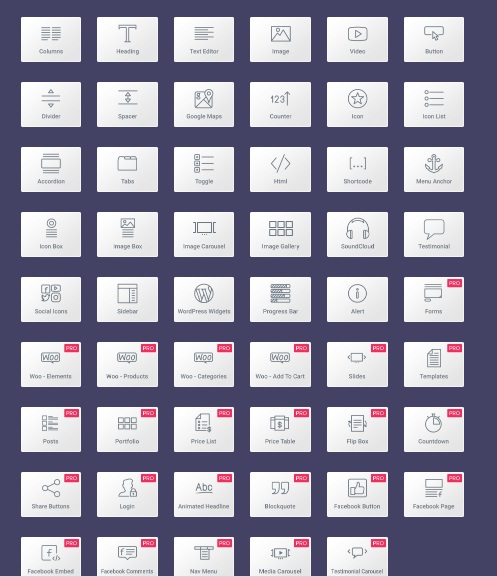 Customization can’t be a question because of not just typography or colors, Elementor grants us full access to an elements existence, including borders, edges and what not! So whatever you wish to customize, can be customized, period!

Mobile responsiveness is another question that pops up when talking of page builders, Elementor again not only provides 100% mobile-responsive templates but has taken things to the next level with its real-time preview screens and percentage controls.

Obviously, it supports advanced functionalities for the more code-savvy designers by letting them add their own custom CSS to the pages.

And as far as Pricing for the Pro plan goes, it offers 3 plans:

And honestly, this is the best-ever pricing-package compared to all the other page builders on this list. It’s cheap, as well as extensively feature rich.

So if you’re digging for a cheap, but a total value for money Visual Composer alternative, I’d say Grab Elementor before they hike the prices!

It is one of the best visual editor plugins for WordPress out in the online marketplace. It’s fast, has a plethora of options for nearly every element, and is robust.

The best part is, it can be used not just to craft swift looking, conversion-optimized static pages, but your normal, everyday blog-content pages as well.

In fact, InstaBuilder comes bundled up with 100 free, pre-designed landing page templates, which cater to every single need and type of landing page you might require, no coding needed, all you’ve got to do is, edit the elements and you’re all done! 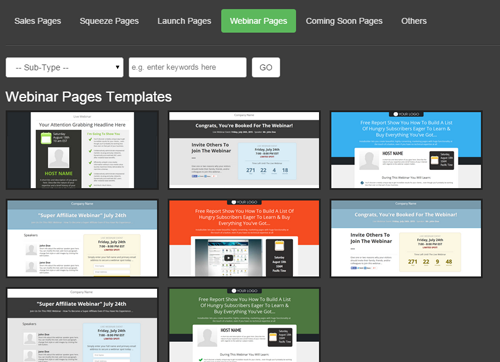 In addition to that, it also lets us create unique “Column and row elements”, with Drag & Drop. This is something that not a lot of visual composers out there offer, at least not with this kind of flexibility.

The customization options are extensive; you can customize literally anything from the depth of a button to the size of a popup. This is a big win, especially when compared to Visual composer which is somewhat conservative when it comes to customizations.

Advanced options such as Device-specific elements let us decide which elements should be shown on which devices,  animations help us crisp the page up, and this is all just the tip of the iceberg.

Obviously editing everything and anything is hands-on and direct, simply drag the element on the page, change the text or image, or add your own, and you’re done. Honestly, crafting a page couldn’t be simpler.

If you’re somewhat of an unsatisfied, and it never seems enough for you, here’s a list of some of the elements InstaBuilder is armed with:

Basically every weapon in the arsenal which helps you win the professionalism battle and makes your page far more lucrative is up for grabs with InstaBuilder.

The only factor why I’d chose Visual Composer over InstaBuilder is if I’m on an extremely tight budget, and am looking for a cheaper alternative to InstaBuilder.

Thrive Architect goes for $77 for the single license,  and $97 for an unlimited license, although there’s a $197 license to use it for clients. Grab InstaBuilder here!

In fact, they’ve announced that soon they’ll be adding A/B testing for landing pages, more templates for pages and popups, as well as a contact form element! So hey it’s totally worth it!

So let’s sum this one up?

Beaver Builder isn’t as big a shot as Elementor, or Divi builder when it comes to Visual Composer alternatives, granted.

But then again, it’s one of the simplest, easiest to use, and one of the top page builders you’ll ever cross paths with.

The major difference between Visual Composer and Beaver Builder is that, Beaver Builder isn’t an in-line editor, instead all the text that you edit is actually edited in a pop-up and then shown on the page. It’s not a deal-breaker, but I still personally prefer the In-line editors. 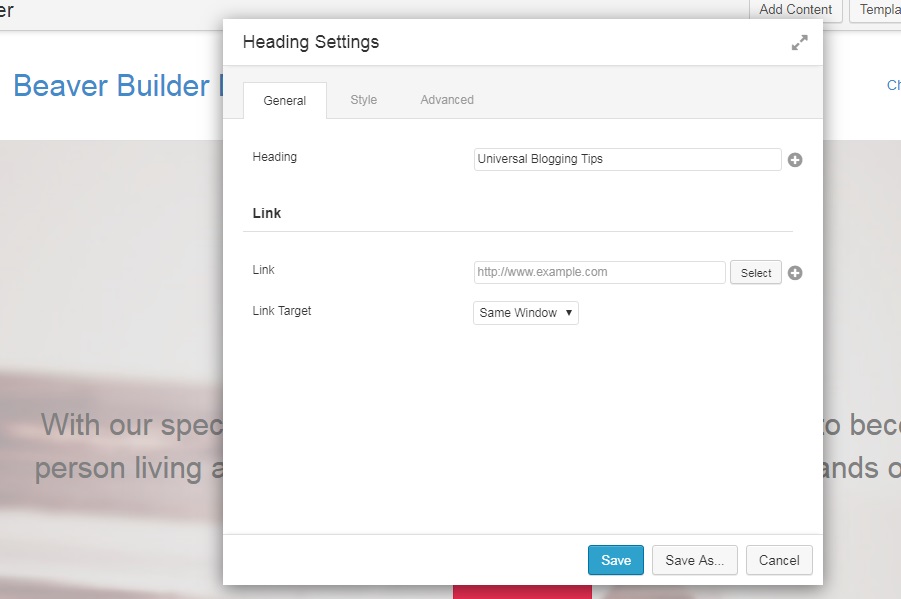 Another major difference is that, while with Visual Composer you can edit both on the back-end as well as the Front-end, Beaver Builder is an exclusively front-end editor, and it’s not a bad thing (just in case you’re wondering).

The Drag and Drop editor is as smooth as can be expected and doesn’t lag while building the pages.

Obviously, Beaver Builder too comes pre-bundled with a number of pre-designed page templates to choose from, although an added feather in the cap of Beaver Builder is that it has categorized its pages into different sections. 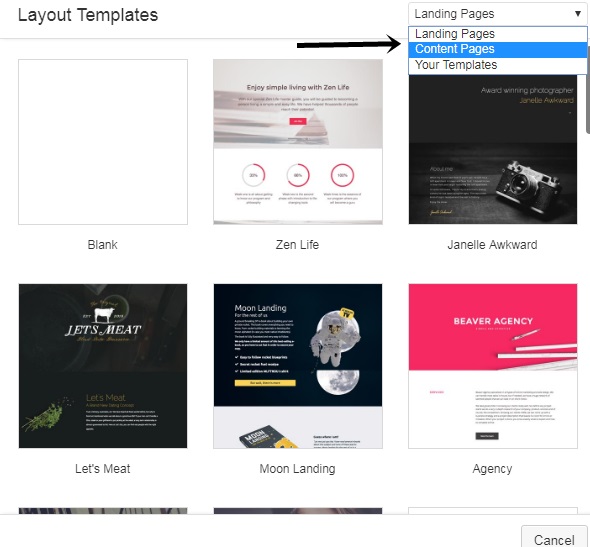 So you can directly choose from Landing Page / Content Page / Custom templates. As far as homepage pages go, it boasts 14 pre-designed templates. 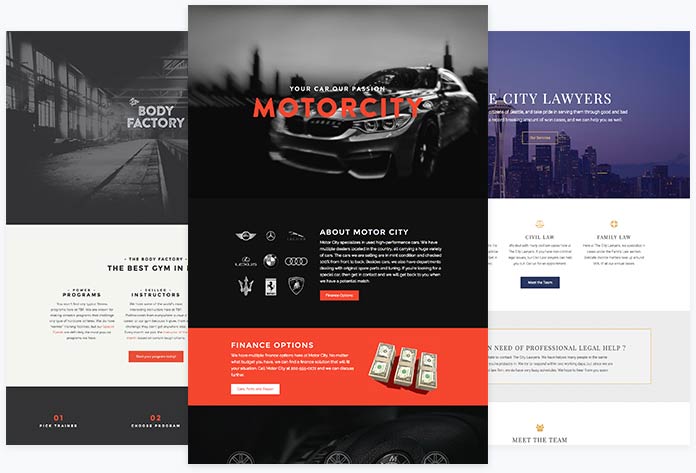 All their pages are completely mobile-responsive as well and can be integrated with every theme.

Again, unlike Visual Composer, they totally support Global Elements as well, so any module saved as Global Module can be used on any other page made with Beaver Builder

While the Advanced ones include: 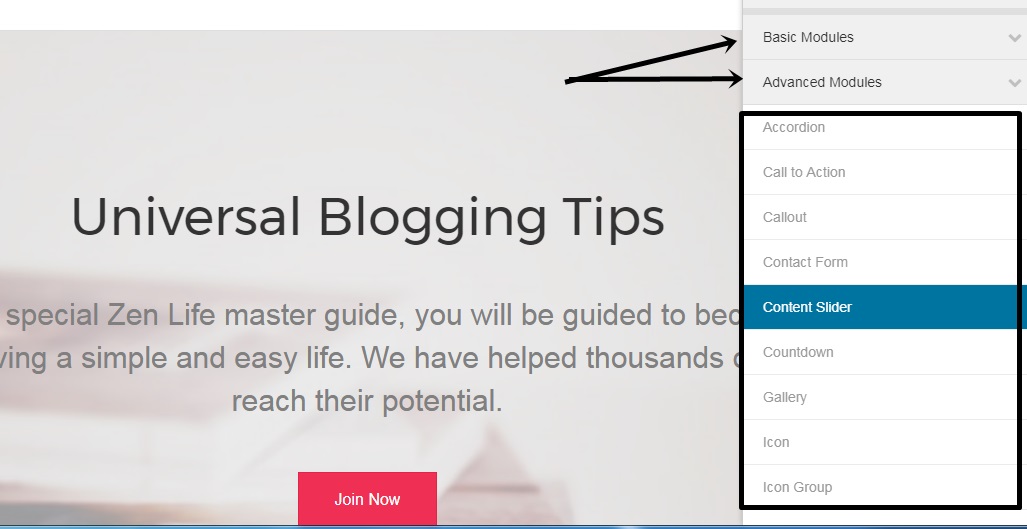 There are some other advanced functionalities as well, such as Display rules, delay-rules and such. There’s an added feature called “Editor mode”, which helps you hand off sites to your clients, without giving them 100% editing access.

This makes sure your clients don’t screw up their sites by accident.

As far as pricing goes, it costs more than Thrive Architect, or The Divi Builder, and still doesn’t have features as impressive as them.

Their lowest plans start as high as $99, and if you opt for the Pro plan, it comes in for $199, and then there’s the $399 USD Agency plan for the really loaded folks out there. 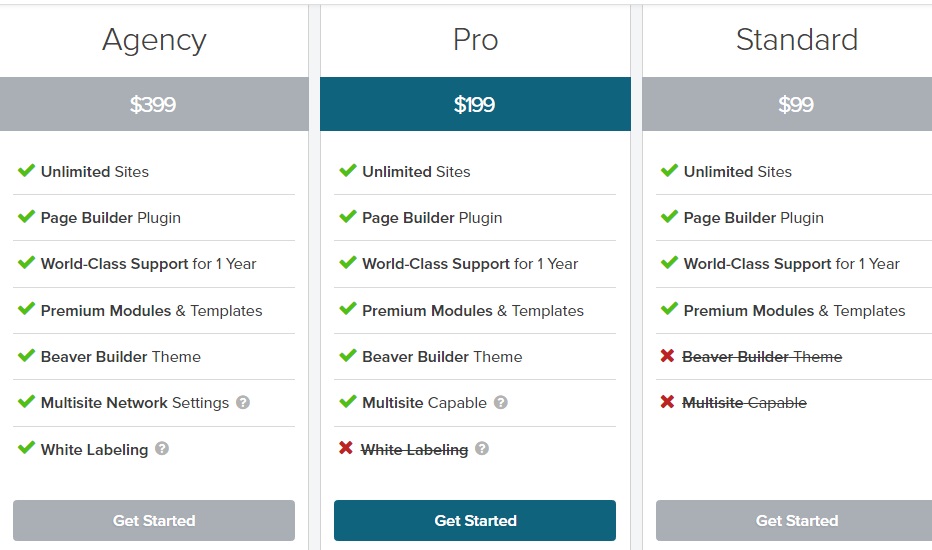 All the plans offer “Unlimited sites” integration, and are a one-time fee!

Without stretching the thread, let me just conclude by saying that we’ve included as many as 4 different Visual Composer alternatives throughout this piece.

Now they all have their pros and cons and differ in their pricing plans.

So which one is the best Visual Composer alternative? I’d say they all are in the same league, with more or less the same features, the final winner would be based on your own preferences, choices, and budget, because except the pricing plans, there isn’t any major difference to most of them.

But still, if you are looking for our suggestions, I would highly recommend you going for Divi Builder by Elegant Themes

Do let us know your personal favorites in the comments and the reason why they’ve won you over.